A short time ago, Scan Plus got to be part of a special project that emphasizes how useful ground penetrating radar (GPR) can be and how it can make a big difference to people in a really amusing way. We were contacted through Facebook with a very interesting request from a school in Sherbrooke, Quebec. The request was to scan to find the time capsule buried in the late 70’s.

Due to the good memory of some students who had been there when the capsule was buried, we had a general idea where to look. Since the area of concern was in the employee/student parking lot, we picked a day when they were off school to allow us the freedom to scan the whole area.

It took about 2 hours to work the site. We found what we were looking for and outlined the area on the blacktop so the excavation crew would know where to dig.

The staff and students were ecstatic that we found the tank! They had made other attempts in the past with other equipment and didn’t have any luck. 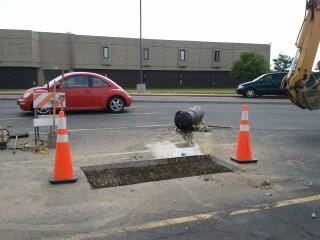 The school representative immediately contacted us with pictures of the excavation of the capsule. We were then invited to the banquet where my technician was congratulated with his efforts. Although most of the contents were damaged from water, it was still a great event to be a part of and an exciting change from the ordinary locating that we often do!

ARE YOU LOOKING FOR AN EXPERIENCED TEAM IN CONCRETE SCANNING & UTILITY LOCATING?